In 1980, Simon Lévesque and his partners bought a sugar bush that they named Érablière LÉCO. In 1986, Simon became the sole owner of his sugar bush which he renamed Érablière Tem-Sucre. Simon’s son, Hugo Lévesque, bought back the family business in 2006.

With the arrival of Hugo Lévesque on the scene, Tem-Sucre entered its modern era. Motivated to further push back the boundaries of the maple syrup industry, Hugo did everything possible to capitalize on all the opportunities that he saw in maple sap. He formed a solid team and perfected his creative production to build a reputation that would enable him to establish a trusting partnership with points of sale (providers), thanks to innovative quality products and an unwavering adherence to schedules.

Today, there is no doubt that the entrepreneurial visions of Hugo and his team have borne fruit, making Tem-Sucre » a true leader regarding high‑quality maple products, in Ontario, in Quebec, and, soon, in Europe.

Its partnership with Bec Cola (maple-flavoured cola), as the exclusive distributor in Abitibi‑Témiscamingue, is an excellent example of Tem-Sucre’s ambitions and its desire to become a proud maple product ambassador. Its recent creation of a maple vinaigrette is proof of its dedication to produce innovative regional products.

Tem-Sucre is much more than just a sugar bush. Tem‑Sucre means more than 10 employees (in high season), 48,000 litres of processed maple sap every year, 15,000 taps, and close to 300 clients, all for the purpose of creating inventive regional products to play an instrumental role in Quebec’s gastronomy emancipation.

Érablière Tem-Sucre: the partner of choice that takes you wherever your culinary imagination leads you. 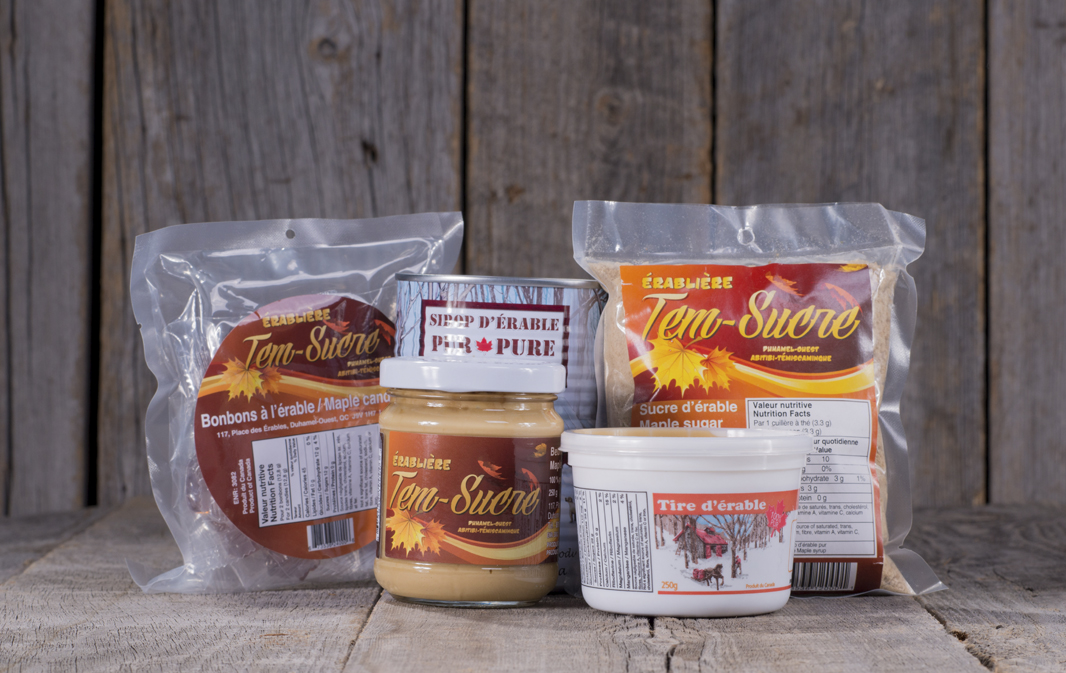 *We do not offer meals in our facilities, we’re maple products distributors.